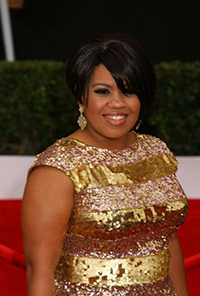 Chandra Wilson is best known for her multi award-winning role of Dr. Miranda Bailey on the hit ABC drama Grey’s Anatomy, now entering its 18th Season as the longest running medical drama on network prime time television.  She has received the Screen Actors Guild Award, People’s Choice Award, Prism Award, four NAACP Image Awards and four Emmy Award nominations for her work on the show. And having directed 20 episodes thus far, she has received an NAACP Image Award for Outstanding Director in a Series Drama, and a Women’s Image Network award for Drama Series Directed by a Woman. She has also directed Scandal, Good Trouble, and 3 episodes of The Fosters.

She has been featured in Heart and Soul, Ebony, Parade, Venice, Working Mother, MediaPlanet and Essence magazines, and honored in an Entertainment Weekly year end issue with one of the year’s “Great Performances, Memorable Moments from 2005”. TV Guide called her a “Scene Stealer” in the August 2005 issue. In the Spring of 2004, she was selected by The New York Times as one of “8 to Watch, Onstage and Behind the Scenes”.

This Houston, Texas native began performing in musicals at the age of five with Theatre Under the Stars (TUTS) where she appeared in more than ten of their major musical productions. At Houston’s Ensemble Theatre, she portrayed Li’l Bits in One Monkey Don’t Stop No Show and, in the summer of 2005, received their Rising Star honor for her accomplishments thus far. She graduated from Houston’s High School for the Performing and Visual Arts, and later went on to acquire her BFA in Drama from NYU’s Tisch School of the Arts. There, she spent four years training at the Lee Strasberg Theatre Institute.

In television, Chandra hosted the ABCs of Schoolhouse Rock special for ABC, and gave a Prism Award winning and Emmy nominated performance in Hallmark Channel’s Accidental Friendship. She was a series regular on ABC’s Bob Patterson in the role of Claudia Hopper and has made numerous other television appearances, including guest-starring roles on General Hospital, The Sopranos, Law and Order: Special Victims Unit, Sex and the City, Third Watch, 100 Centre Street, Cosby, Law & Order and The Cosby Show. She has had recurring roles on One Life to Live and Queens Supreme, and a principle role in the CBS Schoolbreak Special Sexual Considerations. She has also appeared in national television commercials for Blockbuster Video, Burger King, Scope, and the United Negro College Fund as well as numerous radio commercials.

On the big screen, Chandra Wilson stars as Lena Gladwell in the ABFF award winning film short Muted in which she was recognized by the 2015 SOHO International Film Festival with their Best Acting Performance Award.  She narrates the documentary Autism in America, and appears as supporting characters in the films Frankie and Alice starring Halle Berry, directed by Geoffrey Sax; Lone Star, directed by John Sayles; and Philadelphia, directed by Jonathan Demme.

Her Broadway credits include the role of Matron Mama Morton in Chicago: the Musical, Gary Coleman in Avenue Q, Dotty Moffett in Caroline, or Change and Flossie’s Friend in On the Town, with the latter two directed by George C. Wolfe. She portrayed the role of Bonna Willis in the production of The Good Times are Killing Me by Lynda Barry both at the Second Stage and Minetta Lane Theatres, which won her a Theatre World Award for Outstanding Debut Performance. Other stage credits include Caroline, or Change at the Public Theatre, The Miracle Worker at Charlotte Repertory Theatre, Paper Moon: The Musical at The Papermill Playhouse, The Family of Mann by Theresa Rebeck at the Second Stage Theatre, Believing for the Young Playwright’s Festival at Playwrights Horizons, Little Shop of Horrors at the Falmouth Playhouse and the Shakespeare in the Park pre Broadway revival of On the Town.

Chandra has received honors from several charitable organizations. Her philanthropic work has included being national spokesperson for the Cyclic Vomiting Syndrome Association (CVSA) which works to bring awareness of the debilitating illness CVS. And she supports other charities whose mission is to increase awareness and understanding of mitochondrial disease and its related functional disorders. She annually funds the Sermoonjoy Scholarship which provides four year college scholarships to 2 Theatre Department graduates from the High School for the Performing and Visual Arts, and the Sermoonjoy Fellowship which provides 2 annual fellowships to mid-career actors looking to receive training in a specific area of technique. More information can be found at www.sermoonjoy.org.