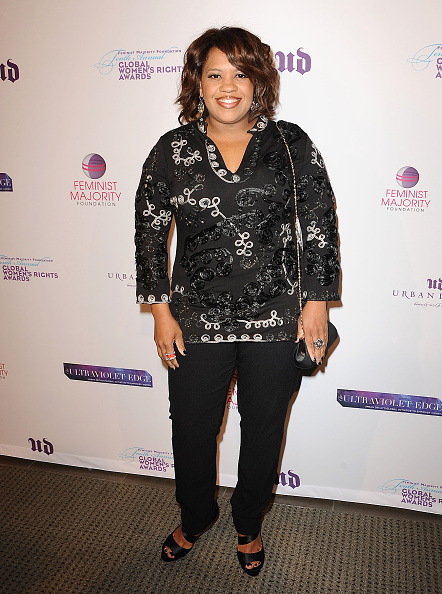 5/18/2015 Chandra Wilson had the pleasure of speaking of behalf of honoree Shonda Rhimes at the 10th Annual Global Women’s Rights Awards by the Feminist Majority Foundation held at the Pacific Design Center.

Showrunners Shonda Rhimes and Jenji Kohan called on females to “woman up” and draw mouths on Hello Kitty knick-knacks when they were honored by the Feminist Majority Foundation on Monday night.

Rhimes, who is responsible for ABC’s trifecta of female-led hits, including “Scandal,” “How to Get Away With Murder” and “Grey’s Anatomy,” was celebrated alongside Kohan during the foundation’s 10th Global Women’s Rights Awards for “changing the face of media.”

“Orange Is the New Black” and “Weeds” creator Kohan also drew praise for her Netflix series, which chronicles the diverse female denizens of the fictional Litchfield Penitentiary. (The SAG Award-winning dramedy returns for a third season June 12.)

The executive producers were saluted at the the Pacific Design Center in West Hollywood for showcasing complicated characters, challenging race and sex stereotypes on the small screen and being fierce champions of women’s rights, civil rights and lesbian, gay and transgender rights. And when they were given the mike, they advocated for their gender and set the tone for the next crop of young feminists seeking equality for women.

“I absolutely love being a woman. I mean, I love it,” Rhimes said in her speech. “It never occurred to me not to love it. I am fairly lucky and I only am recently learning this [is because of] how I grew up. I had this tremendous powerhouse of a mother who raised me to feel incredibly confident at all times. To trust in myself. To love everything about myself. I mean, I think I’m fabulous. No matter what my hair is doing or how my butt is growing. No matter what they’re saying about me, my flaws are gorgeous. I think I’m cute. I know I’m smart. I believe in me. I’m a woman phenomenally. My mama, she Maya Angelou-ed the [expletive] out of me.”

The showrunner also shared an anecdote about her willowy, Ivy League-educated assistant who wished that she could be a man for a day so that she could know what it feels like to “have it all.” Rhimes said she decried her wish and told her to “woman up” because “we don’t have time to be terrified” about being a woman and “there’s no room for such an enormous lack of confidence in the next generation of feminists.”